The Feds Are So Desperate For Violent ‘White Supremacy,’ They’re Fabricating It  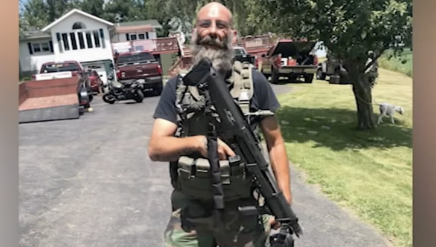 Last Friday, Homeland Security Secretary Alejandro Mayorkas declared white supremacists and “domestic violent extremism” to be the “most prominent threat” currently facing our country. The timing could not have been more perfect. Just hours later, a jury in Grand Rapids, Michigan exposed the Justice Department’s largest alleged “domestic terrorism” case of the last 18 months as a failed FBI entrapment scheme to smear conservatives as white supremacists ahead of the 2020 election.

By refusing to convict four men accused of plotting to kidnap and kill Michigan Gov. Gretchen Whitmer before Election Day 2020, the Grand Rapids jury seemed to side with defense attorneys who argued their clients were not domestic terrorists, but entrapped by undercover FBI agents and at least a dozen informants who planned and funded the kidnapping operation.

“The key to the government’s plan was to turn general discontent with Gov. Whitmer’s COVID-19 restrictions into a crime that could be prosecuted,” defense lawyers wrote in a joint motion. “The government picked what it knew would be a sensational charge: conspiracy to kidnap the governor. When the government was faced with evidence showing that the defendants had no interest in a kidnapping plot, it refused to accept failure and continued to push its plan.”

The FBI’s governor-kidnaping hoax demonstrates just how serious federal law enforcement agencies are about pursuing domestic extremists, even if it means the alleged threat originates in Washington, D.C. or FBI field offices.

Mayorkas’s doubling-down on the threat of white supremacists, even in light of DOJ’s failure in Michigan, is a result of the time and resources the Biden administration and the Department of Homeland Security (DHS) have dedicated to fighting this perceived threat instead of actual threats, such as the massive migrant surge expected to overwhelm U.S. borders next month.

In his first address to Congress, President Joe Biden cited “white supremacist terrorism” as the “most lethal terrorist threat to the homeland today.”

In March 2021, DHS and the FBI issued a joint memo warning that “domestic extremists” were ramping up to “take control of the U.S. Capitol and remove democratic lawmakers on or about the 4th of March.” Nothing happened on March 4.

In June 2021, DHS issued a warning, without evidence, that the centennial commemoration of the Tulsa Race Massacre might be a target of extremism. Nothing happened that day either.

That same month, the Biden White House issued a “fact sheet“ entitled the “National Strategy for Countering Domestic Terrorism.” It claimed that “racially or ethnically motivated violent extremists who advocate for the superiority of the white race” are a top domestic terror threat facing America.

This “white supremacist” drumbeat was just the precursor to the creation of a new “domestic terrorism unit,” the Justice Department announced it was forming in January this year. Of course, we experienced a similar overaction in the Bush-era, when DHS was created to protect us all from another 9/11, which also led to the kinds of mass surveillance and accusations of FBI entrapment that we are witnessing now.

If the Whitmer case is any indication, this type of hyperfocus will incentivize federal law enforcement to go to whatever lengths necessary when investigating potential domestic extremists, no matter how overstated the risk.