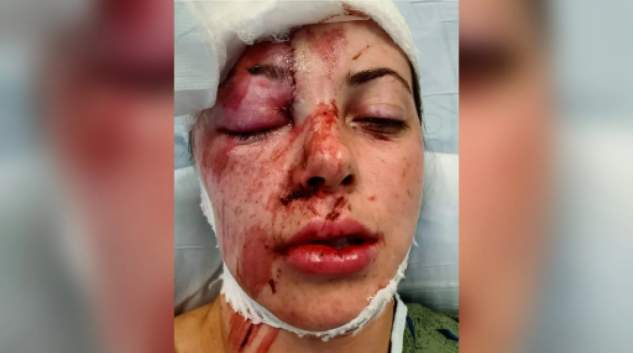 Felicia Konold faces more than 30 years of prison time if found guilty for the crime of marching at the “Stop The Steal” Protest on January 6th. She has been indicted for the ridiculous charge of “Conspiracy” for walking next to a group of Proud Boys. The fake news media has painted her as a “Proud Boy.” (She is NOT, the Proud Boys are an all-male fraternity and drinking club.) Felicia’s newborn son will be taken away by the government if she is convicted and sent to prison.  This is her incredible story.

While still asleep in the early morning of February 11, 2021, 20+ FBI Agents and Federal SWAT Team members kicked in the door to Felicia Konold’s farmhouse.  The 26-year-old single mother awoke suddenly to officers yelling from outside, “FBI! Come out of the house, now!”

Through the windows, Felicia saw an entire row of 15+ unmarked vehicles lined up nose to tail along the main road.  Their bright flashing lights and mounted spotlights piercing the darkness.  In passing she banged on the door to her aunt’s room, told her to wake up and go outside, that the FBI was at the door.  Her Aunt said, “Ok, let me get ready”.  On her way to the front door Felicia responded back, “No, you have to come NOW!”

FLASHBACK…On February 13, 2020, Felica Konold was involved in a horrific vehicle accident in which she tragically went through the windshield.  In those early morning hours of February 14th, she received hours of life-saving surgery, and was a day nobody involved expected her to survive.

She visited the Red Wood Forest, Yellowstone National Park, and the Grand Canyon.  She fell in love with “Lobstah” Rolls in Maine, drove a Maserati in North Carolina, surfed during a hurricane in the Carolinas, and camped out in many national parks.  It was during one of these road trips while in Tennessee with her younger brother, Cory Konold, that they learned of President Trump’s “Save America” rally to be held on January 6th in Washington DC.  She mentioned they should go and see the President speak if they were in the vicinity.  This led to the events described in this article…

Felicia opened the front door to find approximately 20 officers with shields and automatic rifles pointed directly at her.  They immediately ordered her to put her hands up and walk towards them.  They asked if she had any weapons on her.  Pointing to the night clothes she had been sleeping in, Felicia responded “Does it look like I have any weapons on me?  What in the world is this all about?”  While Felicia walked towards them, they continued to yell for her to put her hands on her head.

As she approached the halfway distance to them, they quickly advanced, grabbed her hands and handcuffed them behind her back.  They then asked, “Is there anybody else in the house?”  Felicia responded “Yes, my aunt!  She is disabled, and she’s in her bedroom,” and then proceeded to describe the location in the house.

As many of the agents entered the house to clear it, Felicia was kept outside.  The agents escorted her aunt out to the living room area, while other agents scoured the house searching for weapons.  They brought all the weapons outside, cleared them, and then laid them on a nearby table.

When the “all clear” was given, Felicia noticed one of the guns was unaccounted for and notified the agents they had missed one.  Felicia told them what it was and where they could find it, calling after them “Be careful, it is loaded!”  She then looked back at the officer holding her and questioned in disbelief, “You guys seriously get paid to do this?”

They walked Felicia to one of the unmarked SUVs, then continued to raid the house for hours. In total, they seized about 2 pages worth of completely unrelated items and personal possessions.  Of the items seized, only two or three even pertained to the events of January 6th.

Refusing to answer Felicia’s questions regarding why all of this was happening, they took her in the unmarked FBI SUV to an FBI facility about an hour away.  On the ride there, Felicia remarked that the music sucked.  They asked, “Would you happen to have a song request, then?”  “Courtesy of the Red, White, and Blue,” Felicia replied.  Felicia sang along, following it with Shania Twain’s “I Feel Like a Woman”.

Once at the FBI facility, Felicia was interrogated for 3 to 4 hours.  Here they asked Felicia questions without answering any of her questions as to what this was all about – although she began to get an idea.  After steadfastly refusing to answer their questions until they answered hers, Felicia was then taken on a 3- or 4-hour drive to what can best be described as “a large, undisclosed Federal Prison facility.” For transport, Felicia was shackled on both feet and hands, which then were secured to a waist chain.

“They were packing some serious heat,” Felicia recalled.  “I was actually shocked that I was being treated like a mass murderer – the whole experience seemed surreal.  Especially since I never even committed any kind of violence, whatsoever, and had been co-operative throughout.  Not to mention I had never been arrested before this, so the entire situation I found myself in was worse than any nightmare I ever had.  Little did I know just how much worse it would get.”

Upon arrival at the Federal Prison where she would spend the next 9 days, Felicia was then secured to a wheelchair kind of apparatus and transported inside the facility.  Immediately upon entering, she looked to her right and saw her younger brother, Cory Konold, sitting in a holding cell.  She called out his name and they looked at each other.  Knowing that her younger brother had to have gone through similar things as she did, her heart sunk to the pit of her stomach.  As Felicia had always been extremely protective of him in a motherly kind of way, this was the precise moment that broke Felicia’s heart.

Further, Felicia recalls the entire reality of the situation suddenly hit her like a ton of bricks.  It awakened her out of a state of “fogginess” and “shock” from disbelief, into reality.  She was ACTUALLY a PRISONER inside a PRISON! Felicia Konold and her son born after Jan. 6th

Next, Felicia was taken to a tiny, one-person wire-mesh cage with a chair and no room to maneuver or walk around.  Here she sat for 8+ hours until all the other in-take prisoners – including her brother – passed by and into another room out of sight to be processed.   When she was retrieved and went through her own unique processing, two guards were at her side the entire duration.

While the other prisoners were given multiple sets of clothes, bed linens, toiletries, and allowed a phone call – Felicia was given only one set of clothes and nothing else!  She was not even allowed to have a phone call!  Prompted by the exchange between her and Cory when she entered, she was asked by the intake personnel if Cory Konold was her husband.  “Cory is my younger brother,” she corrected them.

After this intake process, Felicia was escorted to what would become her holding cell through a maze of approximately 15 gates and common areas.  This alone proved daunting in that each area they approached had to be evacuated, then secured, before they could proceed.

Her holding cell was a cement square, without windows, and with a metal bed anchored to the walls.  There was a combination metal sink/toilet bowl as a single unit, and the sink had only a drip of water that would come out.  There was also a Solid Door with a window and another small opening with a smaller trapdoor below the window.  The incredibly strong smell of fresh paint on the walls covered a lingering and permanent musky smell, leading to an ever-persistent and lingering headache for Felicia over the days that followed.

The small trapdoor below the window on the door is where Felicia’s food was delivered, given to her only after she complied with orders to stand facing the back wall of her cell.  She was always the last person served in a pod that included approximately 50 prisoners.  The food given to her was always old, soggy, or stale – and even moldy at times.  Knowing she was pregnant, Felicia forced her starving self to devour every possible bite, even if it meant swallowing back the vomit.

Through the same small trapdoor, Felicia would have to put her hands out to be handcuffed before they would open the door for her to leave her cell.  Everyone else in the “pod” was allowed to leave their cells every other day to shower, hang out in the rec area, or go outside for an hour of fresh air.  Felicia, however, was denied all these things – even going over 5 days before being allowed even a brisk shower!

However, one of the things that Felicia did do on a regular basis throughout her time spent in this cell, was to sing the National Anthem.  Many of the other prisoners in the adjoining cells within the pod complimented her on her singing and even gave her the nickname “Songbird”.  In times of quiet, they would often yell out “Sing for us, Songbird.” Felicia’s son Henry, at risk for being taken away by The Biden Regime if Konold is found guilty and sent to prison.

In summary, the last two years have been a wild rollercoaster ride for Felicia Konold.  On February 14, 2020, she found herself in the hospital fighting for her life.  On February 14, 2021, she had her life turned upside-down as she was held as a Political Prisoner.  However, on February 14, 2022 she was home with both her 10-year-old son and 3-month-old newborn son, Henry Snow! Although she is incredibly thankful to be with her two sons, she does remain a Political Prisoner in home confinement under very tight supervision and restrictions – facing more than 30 years of prison time.   However, the thing that Felicia dreads the most to this very day is the very real possibility that she may be separated from her two sons, at the very point in their lives when they will need her the most.

This, coupled with the lies and slander about her throughout the Mainstream Media, makes it nearly impossible for her to find constant work to support her and her family.  Not only does Felicia rely on the generous financial support of Americans and Patriots around our nation to survive and provide for her family, but she also faces growing legal expenses and upcoming medical expenses.

Randy Ireland is co-Founder of A4Justice.org (Americans For Justice, Inc) and C.A.P.P. (Citizens Against Political Persecution, Inc). He is a USAF Veteran, a Patriot, a successful Entrepreneur, and a staunch defender of both the US Constitution and all Political Prisoners.  If you have any tips related to the events of January 6th or would like to volunteer to help in our efforts, please contact Randy Ireland directly at Randy@A4Justice.org.