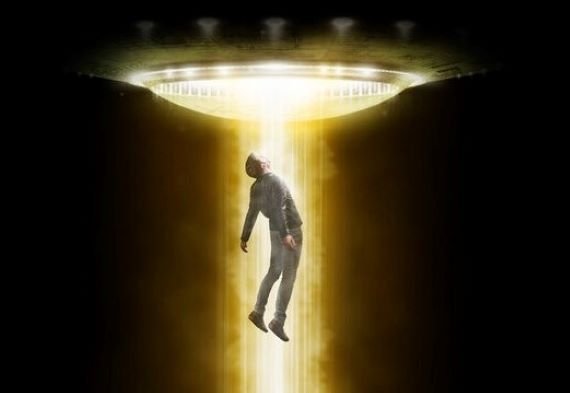 There have been many alien encounter and abduction reports over the years, and these vary widely across the spectrum from the merely odd to the downright outlandish. On occasion, there have been cases that seem to be particularly weird, playing out like some sort of twisted dream and having a decidedly surreal, ofttimes nightmarish quality to them. These are the cases that are even more bizarre than most, and one little known report comes to us from the country of Germany, where one man came face to face with forces beyond his understanding in an encounter that really pushes the boundaries of the weird.

One morning in August of 1981, an unnamed 55-year-old Polish immigrant living in Germany took a bicycle ride from his home in the city of Rheda-Wiedenbruck on a clear, sunny day. He was rather fond of these leisurely rides, during which he would just meander about and enjoy nature, and on this day, he decided to head to a small lake called Lintel, not far from where he lived. He often went to this lake to enjoy the peaceful serenity of the area, and although his bicycle chain broke and he was forced to walk, it wasn’t far and it was such a lovely day that he kept on going. As he sat looking out over the placid water, his attention was drawn to movement out across the lake on the opposite shore. He could see an old shed out there, and nearby it a figure who seemed to be moving around in a strange manner.

The witness apparently thought this was just a fisherman getting supplies from the shed, but as he peered across the water at this person, his attention was drawn to something else. According to the report, the witness saw a massive metallic object, about 10 meters high and 30 meters in diameter, that looked somewhat like an “upside down plate” hovering silently about 50 feet over the surface of the lake, with no apparent windows, seams, or propulsion device. It sort of hovered there for a time, never making a sound, and when the witness looked back to the fisherman he had been observing, he could now see that the man was in the company of several other figures dressed in some kind of suits that seemed to sparkle and glint in the sunlight. When he looked back at the flying object, he could see that it seemed to be moving towards that shed, eventually hovering low over a grassy clearing near it.

As he looked on at this bizarre sight, he still had no idea what he was looking at, and when he saw a woman walking her dog pass right past the object, the witness began to think that it was perhaps some sort of super advanced transport aircraft accepting passengers. He took it upon himself to approach the strange craft, and as he got closer, he could see there was some type of oval opening in its side, and he went even closer, meaning to ask how much admission was for a ride on this wondrous aircraft. It would appear that aliens were the furthest thing from his mind at this point, but this was about to change.

There was a platform leading from the opening down to the ground below, and as he approached the witness noticed one of the figures in the sparkling suits examining the bicycle he had left not far away. He could now see that the being was somewhat translucent, but this was still not enough to deter him from stepping aboard the craft. Once inside, he found himself in a room with what seemed to be surrounded with nearly transparent walls, and he was led to sit on an “invisible bench” by another of those strange figures. He could now smell a very unpleasant smell like burning rubber, and noticed that the fisherman he had seen earlier was sitting nearby in some sort of daze and was half-naked, being examined by one of the entities. The one near him then telepathically demanded that he hand over his satchel, which he did. The surroundings were now filled with that smell of burning rubber, now so potent that it made him feel dizzy, and he also became aware of some other rather unsettling sights around him. He says of what happened:

In my way toward the being I was somewhat light as if there was no floor below. I saw a cut off head of a cow without left eye and a half of its horn that was also cut off. There were some chains in it jaws. There were also childish shoes and glasses. They put me on some table. I felt lightness as if I was devoid of some internal organs. The interior part of the object was light with pinkish-violet glow.

He was brought into a “misty, blue-grayish room” with more of the beings, and he was undressed and forced to lie down on another table. He was then examined, dressed up again, and his bag was returned to him. He was also given some sort of belt, that seemed to transform into different shapes and had strange symbols on its side. The belt would also hover over the floor if dropped and return to his hand, and would always return to its original position no matter how much he tried to fold it up. As all of this was going on, the ship seemed to be moving, and he would say:

I could see many lights and I don’t know if in the ceiling or by a transparent floor I saw an enormous city with illuminated tower blocks – sometimes I was observing them from various positions. And maybe I was in some big machine or over it, somewhere far away when it was a night and everything around resembled very much an illuminated city.

The witness also says that a “small, transparent ball as big as a tennis ball” suddenly materialized in his hand, which “sparkled with many colors.” He could see when it shone that the bones in his hands were visible, like an x-ray, and this frightened him enough to make him want to throw the ball away, but he found he could not, as every time he threw it hovered back to him in much the same way that the belt did. The ball seemed to be weightless, and when he looked within it, he could see various strange things. The original report by UFO researcher Marcin Mizera would say of this:

The ball was emitting an image from inside – something like a three-dimension show. There were impossible things inside. From a chaos [a multitude of colorful stains divided by lines] there formed some images. There appeared: a tower [measuring pressure] from the town where he lived and then a town hall and a tower block standing in vicinity of his house. Then other similar elements were seen, for example: church towers, playing fields, parking lots etc. Mrs. X saw even himself holding the ball and looking into it. He wanted to turn it in his hands but it transformed into a big, glass circle [7-10 m.wide] that got smaller immediately and transformed into the original ball.

What in the world was going on here? It is all so bizarre that it is hard to say. All through this, one of the mysterious figures just looked on with an inscrutable expression, as if observing, and the witness would say of what happened next:

I smiled foolishly because it was weird, cool and funny. I haven’t seen something like it before. The humanoid was looking at me as a king at a clown. Anyway, I found myself unexpectedly on a scrapheap.

He was just suddenly there on the ground, around 5 km from the lake, with a severe headache and his watch inexplicably broken. His skin was red, as if suffering a sunburn, and he also noticed that both the orb and the belt he had been given on the craft were gone. A search of the area also showed that his bicycle was gone, and so he walked home. He felt a sudden exhaustion upon arriving, and fell into a deep sleep. From that day on, he claims that he suddenly had an incredible affinity and talent for painting, and went on to become a well-known artist in the area, although it is unclear if this had anything to do with his surreal encounter or not. The whole thing is incredibly bizarre, and it is really hard to make sense of. What happened to this man and what did he experience out there? It is hard to say for sure, but it is certainly one of the weirder alien encounter reports there is.